Let's see, on August 22nd, Marine Chick (my sister), and I went to see Rush in St. Louis. It was AWESOME. LIKE HELLO. IT'S RUSH. OF COURSE IT WAS AWESOME. I still can't get over it. Rush was pure amazing. Being able to see these guys I admire was just fantastic. 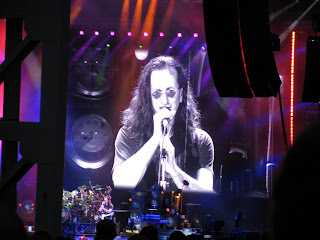 I had a nice little weekend with my sister and her family. Sadly, later that week, a friend out in St. Louis died of a heart attack. It's still quite shocking to realize next time I go to St. Louis, I won't see him. I feel so bad for my nephew, who really liked the guy. These are the shocking reminders that life can be short. You never know when it will be your time. Live your life with vigor and love. Don't hold back.

My Aunt was so kind to sign me up for a membership at Ballys. I still haven't gone in to work out. I know, I know. I just have a real aversion to working out in front of people. It tests my patience and it kills my self-esteem. But starting next week, I will be going twice a week to start (in addition to riding my bike at home and other workouts at home) and as I get more comfortable, I will go three times a week.

So, next up was Blackguard and Leaves Eyes in Cleveland. Orginally, it was Blackguard, Leaves Eyes, and Kamelot. And I wasn't going to go because I didn't want to spend that much money and the closest show was Cleveland, blah blah blah. But then the Kamelot singer got sick and Kamelot cancelled the tour. So I was going to go to Detroit to see Blackguard and Leaves Eyes. But then they announced they were still going to do the Cleveland show, so I went up to Kent to stay with my bff and then only had to drive half an hour to Cleveland.

I met up with a couple of friends, one whom I had met, one whom I only knew online. So this was very cool to spend some time with them. I'm a HUGE Blackguard fan so seeing the guys walk around outside was really excited, though all I could do was smile like a dork, haha. It ended up that only about 30 or so people showed up. Mike, Eric and I were front row.

Blackguard was AMAZING. FANTASTIC. PERFECTION. AWESOME. I had an amazing time during their set. I knew all of the songs, so I was really excited and screaming and the guys seemed to love it. Especially during their last song, This Round's On Me. I was completely singing along and Paul, the singer, LOVED it. He was smiling ear to ear and he kept singing right in front of me. And near the end of the song he grabbed my hand and kissed it. Needless to say, I was quite happy at their reception of me.

I kind of talked to him inbetween the sets. I told him they put on a great show and he thanked me for coming and singing along. Their set list was: Allegiance, In Time, The Sword, Cinder, Scarlet To Snow, Farewell, and This Round's On Me. The Sword is my favorite Blackguard song, and Scarlet To Snow and This Round's On Me are also my favorites, so it was really nice to be able to hear those three songs. Of course, I also love Allegiance, In Time, Cinder, and Farewell! So basically, Blackguard plays an awesome set!

So then Leaves Eyes came on and OH MY GOD. Liv Kristine is simply gorgeous. She is stunning. Alex was awesome. Very fun and very hilarious. Leaves Eyes is amazing to see live! Go if you have the chance! During one of the last songs, I forget which, Liv reached for my hand. SHE TOUCHED ME. YES! She was standing in front of me for basically the whole show, so it was really nice. Their set list was: Intro, Njord, My Destiny, Emerald Island, Farewell Proud Men, Take The Devil In Me, Solemn Sea, Leaves Eyes Rick Rolled by Blackguard, Northbound, Ragnarok, Elegy, Froya's Theme & Outro. It was a great nice! Blackguard rick rolling Leaves Eyes was hilarious! Great fun!

After the show, I went to buy a Blackguard shirt and as I was waiting for Terry, one of the guitarists, to find the shirt I wanted, Paul reached out his hand and was saying thank you, and we started talking. It was very cool for me to be approached by someone in the band. Paul was really nice and he kept thanking me, shaking my hand. He hugged me at one point. We talked about the show, we talked about touring, we talked about Mutiny Within (And he and Terry gave me such depressing news!), and we talked about hockey, which was funny. I got Paul and Terry to sign my album, then I got a picture with Paul (and I'm such an idiot, I forgot to get a picture with Terry!), which was such a cute picture, I think. He really was just so nice. He also convinced me to see them on tour with Nevermore, which I will! 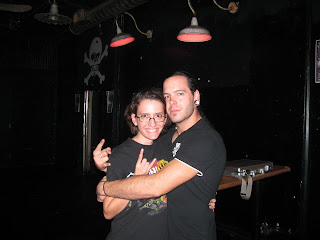 And I also met Alex and Liv from Leaves Eyes. Alex was hilarious and Liv was so sweet! I adore her. 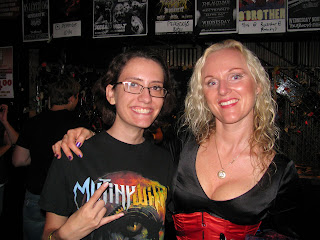 All in all, it was an amazing night! I can't wait to see Blackguard with Nevermore, Warbringer and Hatesphere! I'm a bit nervous about going to a show like that by myself, but I think I'll be fine.

So now I'm just trying to figure out how November is going to go. I have to go up to my Alma Mater to talk about applying to the Secret Service, so that should be fun, lol. I think I'll also go up to Detroit to see family while I'm up that way.

And that's my life for the past month. 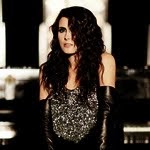